As director general of the Philippine Economic Zone Authority, Brigadier Gen. Charito “Ching” B. Plaza is, in effect, trying to reinvent the wheel, or to put it mildly in today’s lingua franca, disrupting a successful business model.

PEZA has been proven to be a sure-fire formula to attract huge chunks of foreign investments and to boost the Philippine manufacturing sector and in the process, create massive employment and export earnings:  Hugely liberal tax and other perks, no red tape, one-stop shop, and best of all, no graft, especially now under President Duterte’s no-nonsense no corruption policy. 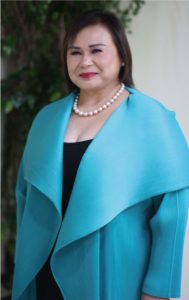 You think 379 operating industrial estates or economic zones are one too many?  Think again.  DG Plaza believes they are not enough.   That there should be many more.  In fact, she wants the entire country to be declared an economic zone.  Which to me, is a brilliant idea.

Because the entire ASEAN territory has been declared a single free market of 600 million anyway.   So why distinguish one location from another, one Philippine island from another.

The Philippines has 300,000 square kms of land or 30 million hectares.  And the biggest landowner is—the government. Most of those lands are idle or unproductive.  So why not develop some of them as manufacturing hubs?

Within the government itself, among the biggest landowners are the state colleges and universities.  And a number of government agencies.   The Department of Finance has a Property Management Office that manages foreclosed or acquired assets.

The University of the Philippines in Diliman alone has 493 hectares.  The land includes 21.55 hectares for the core campus, 137 hectares for academic or support units, 95 hectares for staff housing, 44 hectares for parks and open spaces, 18 hectares, and 113 hectares appropriated for the Ayala Group as a science and technology park.

In other words, easily three-fourths of UP’s Diliman properties could be put to better use – like manufacturing or business process outsourcing, or innovation hubs.  DG Plaza thinks that is what should be done with UP’s suburban Quezon City  lands.

UP System a big landowner 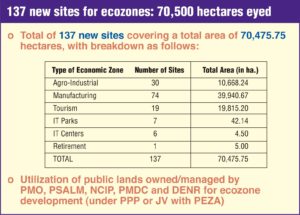 Additionally, UP Los Baños has 5,445 hectares of lands.  It has land grants in Laguna (3,336 hectares, according to Wikipeida), Negros Occidental (704 hectares) and Quezon province (5,719 hectares) totalling nearly 10,000 hectares.  UP Diliman itself is said to have a mammoth land grant of 80,000 hectares in Quezon province.  Those lands are largely idle.

DG Plaza thinks that large tracts of lands such as UP’s could be developed to produce local raw materials that can feed industries.   This will intensify the processing of agricultural produce, boost small and medium businesses, and create employment in the rural areas.

PEZA has entered or is entering into memoranda of understanding with governnent landowners such as UP, DOF’s PMO, and the Department of the Environment and Natural Resources (DENR) for joint development of their idle lands into ecozones. 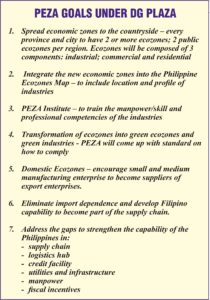 The DENR, for instance, manages timberlands and mining concessions.   “We can promote their lands as agro-forestry zones,” General Plaza suggests.

The cooperative undertaking with DENR, Plaza believes, “could help restore our wood industry.”  “When we had the wood industry in  private hands, government was actually losing. Only 2% of the wood cut was the share of the government. And there was a lot of  technical smuggling and underreporting of actual trees cut.  Corruption was rampant.”

With the agro-forestry economic zones, Plaza explains, “government is assured of the right share of the income because it is PEZA that will provide the permits to export or import.  All the transactions will be properly recorded by PEZA.”

Not for export zones alone

“Why not,” she asks, “discourage these importations and motivate our local SMEs to produce the local raw materials?    We can develop the supply chain for ecozone manufacturers.”    That way, she elaborates, “our SMEs will become indirector exporters when they are located in domestic economic zones as part of the link in a supply chain.  Hopefully, we can reduce drain our dollar reserves and stop dependency on imported raw materials.”

Plaza is not bent on tapping government land holdings alone for factory sites. 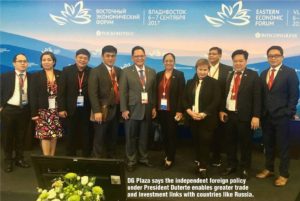 She wants private owners of large tracts of land to approach PEZA for joint ventures to develop industrial communities or cities.  “This is now a major program of PEZA,” stresses the director general.

The PEZA chief  reckons easily one million hectares of government and private lands could be harnessed for production of raw materials for industries and the development of industrial cities.

A BPO IT park should have a minimum area of one hectare, a tourism economic zone five hectares, and an agro-industrial, agro forestry, aquamarine economic zones, and other bigger economic zones easily need 25 hectares, often more. 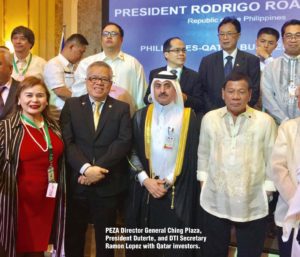 “Our concept of economic zones is that we start it as an industrial zone, then we make  them into townships, and they  grow bigger, they level up as smart cities.”

General Plaza’s other major initiative is the focus on green and the environment.  “We would like to change the old mindset that when you industrialize, you destroy the environment.”

“We will now be promoting a green ecozone and a green industry program,” she declares.   How will that be done?  Plant trees, of course.   Hundreds, if not thousands of them inside the ecozones.

More importantly, perhaps, PEZA will be pursuing the use of environment-friendly technology such as LED lights, recycled water, and less polluting technology, machinery, and equipment.    PEZA, Plaza points out, has prepared a handbook on what is a green ecozone and a green industry.   “We are requiring all our locators to comply with the standards to protect the environment,”  she declares.

SHOCK AND AWE WITH TAXES

By PRESIDENT RODRIGO ROA DUTERTE (Speech delivered during the opening ceremonies of the BOAO Forum for Asia at the BFA International Convention Center, Hainan, China, April 10, 2018) His Excellency President Xi Jinping and Madame […]