At the start of our career, our work defines us. But once a woman becomes pregnant, her child defines her.

First, the woman’s body changes to sustain a human life. Her whole well-being affects the baby. After the pain of childbirth, the recovering mother cares for the erratic infant. Now that she is a mother, she faces competing obligations.

While a man’s time is only divided between work and household, a woman’s time is divided into four: work, household, child education, and parenting. This helps explain women’s low presence in the labor force  (Asian Development Bank).

Many women are in charge of the household. She performs the duties of an operations manager: daily operations; budget and finance; inventory; purchasing and supplies; human resources to hire and train staff; and third-party relations with service providers, caregivers, doctors, teachers, and school staff.

Whether working, stay-at-home, or the main breadwinner, women worldwide, do housework almost twice as much as men, even in rich countries like Sweden. Studies show that if women do less household duties, they have more time for a career and can work as long as men. As it is, household and childcare constrain women to work lesser hours than men. (International Labor Organization)

As a parent, the mother secures the child’s health and safety, as well as the psychological, social, and spiritual needs. Mothers are also the child’s first role model and teacher.

Any one of the above roles—housework, parent, educator—is a full-time job. Yet they are unpaid and do not count towards the gross domestic product (GDP), a main indicator of a nation’s wealth and productivity.

Society still expects the mother to be the primary caregiver. But few governments give her sufficient benefits to accomplish her important tasks.

The Philippines has a 60-day maternity leave for normal birth. “The average across the region is just over 3 months leave (ILO).” But the total maximum amount with social security is only P32,000 (about $711), which is too small to cover expensive baby supplies like milk and diaper for two months.

Meanwhile, progressive countries like Sweden gives either parent 480 days of parental leave, 390 of which are paid at 80% of the salary. Parents are also entitled to reduce their work by 25%; receive child allowance until age 16; avail of free health benefits, school, bus, and prams; care for a young sick child at home for 80% pay up to 120 days; with flexible leave and working hours for parents with young kids.

With such a generous family policy, Sweden has one of the highest rate of female workers at 79.9%, where the OECD average in comparable nations is 58.6 percent.  Also, Sweden’s GDP is $495.62 billion and it is second in the Global Innovation Index 2016.

A mother takes a hit when she comes back to work after baby. A boss may harbor an unfounded bias that she is now less dependable and less committed, so her career track and salary raise stalls. She may be given less responsibilities and even denied promotions. 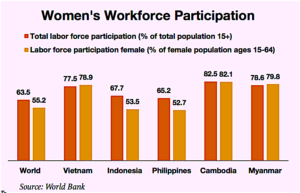 “Current research continues to find evidence of a motherhood penalty for women and of a marriage premium for men.” (National Bureau of Economic Research or NBER)

It is not a problem if the mother has a network of friends and family who can help with caregiving, housework, driving, activities, and doctor visits.

“[F]amily support provides women the flexibility to take advantage of opportunities that further their career and contributes to the number of women in the labor market,” reports the Women’s World Banking (WWB). “Flexible-working options are seen as the single biggest enabler for women to balance their dual role at home and in the workplace.”

But if the support is absent, the woman may, by force or choice, shun greater work responsibility that can take up her family time. She may even work reduced hours, flexible hours, part-time, or from home. She can only do this if: she has an understanding and supportive boss; she is married to a man who has a stable high income or she has some financial support; and her high skill is greatly valued.

Men are still viewed as the main breadwinners. Fathers enjoy the presumption that they are more committed so they are paid more and promoted faster than females.

“In contrast, high scoring women show a net 8% reduction in pay during the first 5 years after giving birth, and that penalty grows to 24% in the decade after birth, even after controlling for actual experience.” (NBER).

“[E]ven if women work full-time at their same employer, on average their wage growth slows and over time and their pay appears to be 14% lower.” (NBER)

Highly skilled women are often married and have children later in life. By the time they become mothers, they have achieved a senior position in their careers and have the economic safety to take a longer leave or not come back at all to care for the child full time.

Even a short break to care for family will cost a mother a lot. A 27-year-old American mother who has worked four years and leaves work for five years with a yearly salary of $40,000 (P1.8 million) is estimated to lose about $700,000 (P31.5 million) of lifetime income from compounding lost benefits and salary increases.

“It appears that extended work interruptions may be the most costly response to childbearing. Recall that this is net of any direct cost of lost experience. Women who leave the workforce for significant periods may indeed fall out of the―fast lane.” (NBER)

In Southeast Asia, there is a high percentage of women in senior management, but there is also a gradual tapering that is attributed to “women leaving the organization to take up child rearing and other family responsibilities. In the Philippines specifically, women cited travel constraints as another reason they might decline a promotion in position.” (WWB)

In the Philippines, 70% of the female labor force are mothers. Mothers who stop working could explain the low 48% rate of female workers compared to the 81% rate of male workers. If women could work as fully as men, they could boost the GDP up to 20 percent.

Countries and corporations need to recognize the critical role of mothers in raising future GDP contributors who will also take care of us when we age.

A strong family policy should give mothers sufficient support and resources to raise children while participating in the labor force. This frees women from the guilt, recrimination, fear, and setbacks associated with either staying home or continuing to work.

“Family policy is also highly connected with labor market policy through the ambition that all individuals should be employed and be able to support oneself. The most important means through which family policy ambitions are achieved are: childcare provision through day care centers and after-school services, parental insurance with job-protected leave rights, and child allowance and other family benefits.” (Population Europe Resource Finder and Archive (PERFA) on Sweden)

For women, it should not be a choice between career or kids because it’s all part of a mother’s work.