That is clearly evident from his third State of the Nation Address (SONA) Monday, July 23, before Congress in suburban Quezon City.    The SONA was 4,870 words long, lasted 48 minutes and was applauded at least 28 times.

The nearly boring speech was mainly about the economy and business.   You cannot have a strong economy and do business without peace and order.

Duterte translates peace and order in terms of his illegal drugs war.  “It (the campaign) will be as relentless and chilling, if you will, as on the day it began,” he stressed.  “These drug dealers know fully well that their business is against the law.” 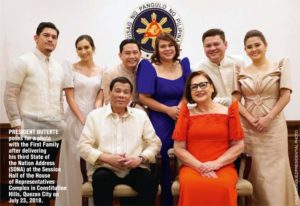 The people give him much credit for the success of the drugs war in which  at least 4,354 “drug personalities” have been killed in the past two years and P21.29 billion worth of illegal drugs have been seized.  Seven of every 10 Filipinos say eradicating illegal drugs is Duterte’s No. 1 achievement.

To me, Duterte’ three main achievements are: 1) the strong economy; 2) free college for all; 3) tax reform.   All three will eventually result in a better or a comfortable life for most Filipinos.

The President seems frustrated in his fight against corruption.  I think that is because government is congenitally corrupt.  Also, the government is run by no more than 200 families, the so-called political dynasties.

“Time and again, I have stressed that corruption must stop,” Duterte winced in his SONA, adding “Corruption is like a leech that it bleeds the government of funds programmed for its infrastructure and other social development projects. It saps the morale or the morale of dedicated and honest government workers. Corruption destroys those who succumb to its temptation and eventually it is the innocent who will suffer and bear its horrible consequences.  The love of money is corrosive. And sadly, the desire to make the easy kind by being imaginative and manipulative, corrupts absolutely.” 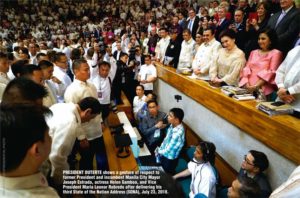 Even with rampant corruption, this ambitious government still earns plenty of money.  The 2019 budget of P3.757 trillion is the biggest in the country’s history.

That is on top of the 2018 budget of P3.323 trillion, the previous record.  The budget will only get bigger and bigger.

To finance that, the government wants to collect more and higher taxes and ease the way businessmen do business to expand the economy and therefore, the tax base.

So you have the TRAIN Law—Tax Reform for Acceleration and Inclusion.

The first package has been in effect and has been blamed for the highest inflation rate in six  years, largely because TRAIN increased tax on diesel, from zero in 2017 to P6 per liter by 2020.

Diesel is the bellwether product that hikes the cost of transportation, utilities, agricultural products, and movement of goods and people.

In the first four months, half of the inflation rate was contributed by only five products – fish (fishermen use diesel to fish), personal transport equipment (vehicles are run mainly by diesel), rice (irrigation pumps are run by diesel); electricity, gas and other fuels; and meat.

“Package 2 will lower corporate income taxes, especially for our small businesses. Lower taxes mean they will have more money to invest and create more jobs. More than 99% of our businesses are micro, small, or medium enterprises (MSME) and employ around 65% of our workers. The enactment of the Package 2 is what stands between today and millions of jobs in the near future.”

TRAIN cannot be derailed.  Says Duterte: “We cannot and should not (stop it).  We need this for sustainable growth that leaves no Filipino left behind. TRAIN is already helping poor families and senior citizens cope up with rising prices. We have distributed unconditional cash transfers to four million people, and we will help six million more this year.”

By end July, Duterte vows “all five packages of my tax reform would have been submitted to Congress. Apart from TRAIN, rice tariffication, and Package 2, they include the mining, alcohol, and tobacco tax increase, reform in property valuation, reform in capital income and financial taxes, and an amnesty program.”

To lower prices, Duterte has warned rice traders and manipulators, saying “the full force of the State shall be brought to bear upon you.”   That sounds like rice manipulators will be the next target of tokhang. 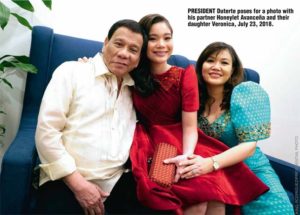 The President wants rice price reduced by P7 per kilo.  Since rice is 20% of the consumer price index, a 20% rice price reduction should reduce the inflation rate considerably.

Meanwhile, Duterte notes that the Ease of Doing Business [Act] “is a significant fight against corruption and improving service delivery.”

He wants the mayors and governors, indeed, all government agencies, to listen – “faithfully implement this law and simply simplify the process.  Make no mistake about it.”

Duterte should ask the Securities and Exchange Commission to mend its ways.  It takes SEC at least six months and for businessmen to make at least four follow up visits, to approve a company’s articles of incorporation. The process should take only two days at the most.  But the SEC has computerized itself and apparently its going high tech has been sabotaged.

And why did Duterte install Gloria Macapagal Arroyo as speaker?

The House of Representatives is the origin of three very important initiatives – the annual budget, taxes, and impeachment.

GMA is this country’s post -1986 economist-president.  During her nine-year presidency, the economy more than doubled in value and per capital income tripled.

Since many of Duterte’s legislative measures are economic or business-related, it is good that an economist is at the helm of the House.

And if Duterte makes mistakes, well, the House originates impeachment.  GMA, of course, is a good leader as well as a good follower.   She has a great sense of timing.  She will be an asset to Duterte whose main problems now are: the economy, corruption, and peace and order.

BizNewsAsia’s “Man of the Year 2017” is indisputably President Rodrigo Roa Duterte. A lawyer and former prosecutor, the mayor of Mindanao’s Davao City for 23 years romped home the coveted title with very little competition. […]