Starting a business is highly risky. By the end of the year, only half remain. Some 4% of small businesses make it to the second year and only 3% make it to the third year. If it survives by the fourth year, it will likely run out of money before its sixth year.

The Philippine government’s renewed commitment to speed up business permits to seven days may encourage more startups to formalize. Otherwise, thousands of new micro businesses will run unregistered each year, just as in previous years. 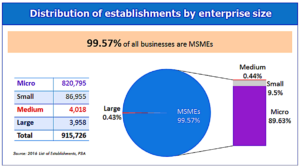 Of the existing 915,726 Filipino businesses, 89% are micro businesses that supplied 30.4% of the country’s jobs. Small businesses make up only 9% of all enterprises. The smallest sectors are Medium businesses (0.44%) and Large companies (0.43%). Micro, Small, and Medium Enterprises (MSMEs) employed 63.3% of all jobs by enterprises, twice that of Large companies.

Startups often begin on a micro scale, with P3 million in assets and nine employees or less. Over 82% of founders risk their own life savings with money from friends and family.

Unfortunately, 82% of startups also fail due to cash flow problems. Other leading causes of failure are founder incompetence; no managerial experience; inexperience with goods or services; and circumstances like neglect, fraud, or disaster.

With so much at stake, entrepreneurs should be armed with good advice and proper knowledge to counter incompetence and inexperience that lead to failure. But where can they get advice? Mentors are rare and inaccessible and sometimes their expertise can be too specific and outdated. Business school does not really teach the skills needed for entrepreneurial success. Neither do workshops and conferences.

True wisdom is achieved by successful entrepreneurs, not life coaches, advisors, or teachers. Even if each success story is unique to the individual founder, their guiding principles are the same.

It’s important to learn directly from the source rather than read a mere report about him. We are lucky if a successful founder personally shares his story. If not, we are still lucky if he writes about it to help startups succeed.

I’ve compiled a list of books particularly for startups because starting a business has different priorities from growing a business. I hope this helps.