The Philippines’ greatest car company marked its 30th year in the country, Wednesday Aug. 1, 2018, at a glittering affair at post Grand Hyatt, with no less than the president, Rodrigo Roa Duterte, as guest of honor and speaker, and the grandson of the Toyota founder, Akio Toyoda, leading the guests.

Toyota Motor Philippines is owned 51% by the family of taipan George Ty, and 49% by the Japanese.

Playing presidential and reading religiously from a prepared speech, Duterte said it was his pleasure to join Toyota Motor Philippines in “celebrating your legacy of innovation that has set the foundation of a strong and growing automotive industry in the country.”

“Over the past three decades,”, the chief executive added, “ ‘Toyota’ has become a household name on the road and the homes of many Filipino families. This speaks volumes about the impact of the [company] not only in moving goods and people, but also in charting the course of our country’s future.”

“Toyota Motor [Philippines] is not only a leader in the production of quality vehicles. It is also a major driver of our economy, encouraging investments that spur national development. It is also a key generator of employment, nurturing the skills and talents of over 55,000 employees,” Duterte said.

The President said that “TMP has also been our government’s steadfast partner in many initiatives such as the Comprehensive Automotive Resurgence Strategy Program or CARS, which aims to attract more investments and implement regulations that will transform the Philippines into an automotive manufacturing hub.”

Duterte promised TMP and Philippine business “this government will protect you and your investments and will ensure a level-playing field for you to thrive in as long as you  obey the laws of the land and safeguard the welfare of your people and general public.”

TMP President Satoru Suzuki expressed gratitude to the government, suppliers, dealers, business partners, and customers who have been and remain to be strong allies and supporters of Toyota. “I firmly believe that the partnership we have developed and harnessed remains to be the strong backbone of Toyota’s success in the Philippines,”  Suzuki said.

For 16 consecutive years, TMP has kept its Triple Crown – for being No. 1 in passenger car sales, No. 1 in commercial vehicle sales, and No. 1 in overall sales.  Toyota has 38% of the local auto market.

“TMP shall not only be a car manufacturer and distributor of quality and reliable vehicles, but, likewise, diversify into a mobility provider, combining efforts with our sister institutions and developing new strategic partnerships,” the dapper and good-looking young Ty said.

Ty said Toyota will continue to evolve in the coming years, especially in addressing the customers’ various needs for cleaner and greener vehicles, mobility, and automotive technology. Its target is zero emissions with the use of more environment-friendly vehicles.

Ty talked about the shift in preference from ownership to ride-hailing and how Toyota is ready to take on a synergistic approach to long-term car-leasing and a modified ride-sharing business in collaboration with ride-hailing companies.

With this vision, Japan’s Toyota Motor Corp. (TMC) President Akio Toyoda affirmed Ty of Toyota’s support as the latter leads TMP in realizing the future of mobility in the Philippines.

Toyoda expressed his gratitude to the Government and the Filipino people. “I would like to reserve my most sincere and deepest thanks for all the people of the Philippines. You warmly accepted us into your homes. I look forward to working more closely with all of you to help build a truly strong, and smiling Philippine nation,” said Toyoda. 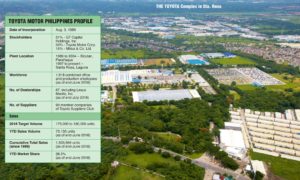 To signify its stronger commitment to local manufacturing, TMP donated 30 locally produced vehicles to the government – 20 units of the All New Vios and 10 units of Innova – symbolizing 30 years of committed passion and service to the Philippine nation. Moreover, an additional 3 Hiace units was also committed.

The Hiace is testament to the vehicle’s reliability as a people-mover, making it a popular choice in the UV market. President Duterte received the Toyota vehicles on behalf of the government.

TMP’s partnership with the government is further strengthened by the company’s participation in the Comprehensive Automotive Resurgence Strategy (CARS) Program, where Toyota has invested a total of P5.53 billion to bring in new in-house and out-house manufacturing capabilities.

Its participating model, the All New Vios, is boosted by a more localized body shell and large plastic parts produced under new technologies and with new manpower skills.

Personally, over the past 50 years, I have bought only five vehicle brands – Volkswagen, Honda, Nissan, Land Rover, and Toyota.

THE RISE OF RSA

BizNewsAsia’s “Man of the Year 2017” is indisputably President Rodrigo Roa Duterte. A lawyer and former prosecutor, the mayor of Mindanao’s Davao City for 23 years romped home the coveted title with very little competition. […]