In the latest survey of 38 countries by the US fact tank Pew Research Center, a global median of 75% and 35 countries say that their news media should always be unbiased in their coverage of political issues.

Europe has the greatest opposition to political bias in their news, with 89% in Spain and 88% in Greece who think this is unacceptable. Also, 78% of Americans say the news media should never favor one political party over another.

Just 20% of the countries say it is sometimes okay to favor one political party, with 41% in India and the Philippines. Still, a small majority of Filipinos at 52% say it is never acceptable for a news organization to be partisan.

The survey excludes China and North Korea. Sample size in the Philippines was 1,000 respondents from ten selected representative municipalities.

Within countries, political identification tends to be the strongest divider of media attitudes, more so than education, age or gender.

Digital technology influences news habits around the world, though internet use is still far from universal. Overall, a global median of 42% get news on the internet at least once a day. In 14 countries, half or more adults get news online daily.

In general, internet access is higher in wealthier countries so there is a greater likelihood of using the internet for news as well. So the wealthier the nation, the more often they get their news from social media. South Korea (80%) and Sweden (70%) have the highest percentage of adults who get news online daily. But, it is less common in the United States (59%) despite their wide internet availability.

In general, across all 38 countries, young people ages 18 to 29 are more likely to get news online. Only 4% of adults 50 and older get their news online as they still prefer to watch news on TV or read the newspaper and newsmagazine.

Few get news from social media

While internet access corresponds to a nation’s wealth, the percentage that gets news specifically on social media at least once a day is unrelated to wealth. The median percentages are about the same in developing economies (33%) as in advanced ones (36%).

Overall, a global median of 35% get news daily through social media, with the most in South Korea (57%), an advanced country, and Lebanon (52%), a developing country. The Philippines, a heavy social media user, only has 27% who get news from social media.

In almost all countries surveyed, the younger, highly educated, with a higher income are more likely than their counterparts to use social networking sites for daily news. This is true in the Philippines with a very young population and a growing middle class, despite a wide gap in education; 49% of ages 18-29 get their news from social media, compared to a low 4% of ages 50 and older.

One notable exception is South Korea, where 45% of people 50 and older use social networking sites daily to access news.

Filipinos 34% who used social media to get their news had higher income, while 18% had lower income.

Public interest in the news affects how news media develops with technology. Large majorities around the world follow national (86%) and local news (78% ) closely. In all 38 countries, over two-thirds closely follow news about their own country. The same is true of news about their city or town in 32 countries.

Generally, ages over 50 are more interested in various types of news than the younger ages. The biggest gaps are in news about one’s own city or town. In 20 countries, ages 50 and older are significantly more likely than people younger than 30 to closely follow local news.

Only in the Philippines and Brazil is the pattern reversed wherein young people are just as likely as the other ages to follow local news. 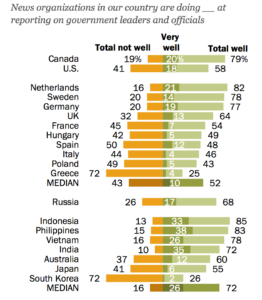 In only six countries do more than two-thirds pay close attention to news about the rest of the world. People outside of the U.S. express a similarly low level of interest in news specifically about the U.S. (48%).

Regardless of age, highly educated men are more likely to follow international news, which is likely connected to their business or profession.

But the gap is not so wide in the Philippines, with 62% of the more educated who follow international news compared to 49% of the less educated. Majority of Filipinos follow news around the world, especially about countries where their relatives live or work.

Who follows US news?

Even fewer people follow news specifically about the U.S. than international news generally, with a global median of only 48%. Still, majorities in 10 nations follow news about the U.S. closely led by Canada (78%), the Netherlands (75%), Japan (74%), Germany (73%) and Australia (71%).

In 27 countries, those who say they like American pop culture, such as music, movies and TV, are also more likely to follow America-centric news.

Respondents in the survey were asked to evaluate their news media on four different measures: covering important issues, providing accurate news, covering government officials, and reporting the different positions on political issues fairly. For all four, the global medians tend to be more positive than negative, but overall views vary across performance area.

Worldwide, news coverage of the most important news events had the highest median rating of 73%. Filipinos had the third highest satisfaction at 87% .

Global ratings (59%) of the media’s coverage of government officials and leaders are slightly lower than their report on the most important stories and accuracy.

Approvals are highest in sub-Saharan Africa (median of 73%) and the Asia-Pacific (72%), with the third highest rating in the Philippines (83%).

Publics around the world also largely agree that news organizations are doing a good job at reporting the news accurately. A global median of 62% say they do very or somewhat well on this measure, with at least half in 29 of the 38 countries expressing this sentiment. Once again, however, the highest levels of approval are sparse; a global median of only 18% say their news media are doing very well on reporting news accurately.

Asia-Pacific (median of 80%) reported the highest news media accuracy in the world, led by the Philippines (86%).

Greece (78%) and South Korea (62%) disapprove of their news media’s inaccuracy, along with Colombia and Chile.

In 11 of the 38 countries, people with higher levels of education are significantly more likely than those with less education to say that media bias is never acceptable.

In general, relationship between partisanship and news media satisfaction appears to be more about people who are satisfied with the party in power.

In Asia, Vietnam and the Philippines tie at 78% who say media reports both sides well, though 20% of Filipinos disagree. South Korea (72%) and US (52%) were the least satisfied with balanced reporting.

Satisfaction with the news media also aligns with two key attitudes about country conditions. The first is whether respondents trust the national government to do what is right for the country. The relationship here is strong at the country level. For example, satisfaction with the news media is highest in the nations surveyed in sub-Saharan Africa and lowest in Latin America-–areas with relatively high and low levels of governmental satisfaction, respectively.

Rather than tied to a particular ideological position, satisfaction with the news media across the globe is more closely related to support for the party in power-–whether that party is left or right.

Trust in government is also related to media satisfaction at the individual level. Within many countries, people who express confidence in the national government are more likely to be satisfied with the news media than those who are less confident. The gap is largest in Vietnam, Sweden, and the United Kingdom.

But in the US, there is no difference in media satisfaction between those who trust the government and those who do not. This is likely due to the divisive actions of its president who spouts fake news, attacks opposing media reports, and the lopsided coverage of its partisan networks.

A second way to measure attitudes about country conditions is by individuals’ opinions about the national economy. Similar to trust in government, the survey finds that in 28 countries people who say the economy is doing well also tend to be more satisfied with their news media.

Public satisfaction with the news media also links closely to trust in one’s national government and a sense that the economy is doing well.

Tanzania, Indonesia, and the Philippines have the highest satisfaction with its government and media, followed closely by Netherlands and Canada.

Ivy Lopez is a lawyer turned journalist who studied in the Jesuit-run Ateneo de Manila University and the University of Pennsylvania’s Wharton School.