The crash-landing of XiamenAir Flight MF8667 at 11:56 p.m. midnight of Aug. 16, 2018 brought into sharp relief the importance of airports to the Philippine economy and to our daily lives.

I had previously estimated the cost to the economy of the two-day closure of the Ninoy Aquino International Airport from midnight of Aug. 16, 2018 to Saturday noon, Aug. 20, 2018 at P5 billion.  That figure is now grossly understated.

The economy produces goods and services (or Gross Domestic Product or GDP) at current prices amounting to P17 trillion. Aviation contributes 9% of that, or P1.53 trillion. Divide P1.53 trillion by 365 days and you get P4.19 billion.  NAIA accounts for 60% of that or P2.5 billion per day.  Multiply P2.5 billion by two days, you get P5 billion.

Yes, P5 billion is the country’s economic loss for two days in the aftermath of the XiamenAir disaster.

And yet, the Chinese airline was slapped a colossally huge amount of only P15 million!  That is not even equivalent to a slap on the wrist for economic sabotage to the tune of P5 billion.

Partylist Congressman Gary Alejano, a former military man, tweeted wryly, “The Chinese now have gotten the idea on how easy it is to paralyze the PHL transpo.”

Anecdotal evidence now shows possibly more than 500,000 air passengers were affected or disrupted by the XiamenAir disaster, not 100,000 as estimated by the NAIA GM Eddie Monreal.

Cebu Pacific informed me that some 200,000 of its domestic and international passengers had to rebook by themselves at the airline’s website. The carrier’s website saw increased activity of 100,000 visits daily after the accident.

The Philippines is an archipelago country, with no less than 7,300 islands, at low tide. You need aviation to connect the islands, their people, their social life, their businesses.

Whether you like it or not, Manila is a veritable regional and global hub.  The Philippines, after all, is one of the world’s fastest growing economies.  It is also the 12th largest consumer market on earth. More than 100 million Chinese travel abroad yearly and they have recently taken to liking the Philippines making them Manila’s No. 1 tourists.

Per capita, Filipinos make more than $3,500 per year, making them middle class.  Not poor. In 10 years, more than 30 million Filipinos came to fly for the first time.

Airports are the wave of the future. A city, in fact, a country cannot prosper without a serious airport. It is integral to tourism, today the world’s biggest business.

In the United States, in states where tourism is strong, civil aviation is a very important component of the economy.  Civil aviation accounts for 18% of the GDP of Hawaii, 12% of Nevada, 7.9% of Arizona, 7.5% of Alaska, 7.2% of Florida, and 6.7% of Washington.

Hong Kong and Singapore as well as Qatar and UAE are basically aviation economies.

What to do then with NAIA?

Well, close it down.  It is useless.  Build a new airport.

That airport is should be the one proposed by San Miguel Corp., a $15-billion facility, 27 kms or 23 minutes north from the 600-hectare NAIA, on 2,500 hectares of mostly flat lands.

Here are the main benefits of the SMC airport:

–Traffic congestion at the 70-year-old NAIA will rise to P24.3 billion annually in losses in airline fuel and operating expenses. Losses will rise to P25.4 billion a year by 2050.

RSA wants to approach the crippling congestion and traffic at NAIA the way Adam and Eve should have solved the apple problem. Rather than digesting it, sell it.

Today, NAIA is in the wrong place at the wrong time. “It has no room for expansion,” say aviation experts.

Crucially, NAIA has safety concerns. North, south, east and west, pilots landing and taking off at NAIA have to grapple with potentially fatal aerial hazards, namely tall buildings within 4.2 kms of their gaze.

NAIA has become the most religious airport in Asia. You pray that your flight arrives or takes off on time and without delay (15 mins is allowable). Average delay at NAIA is 43 minutes, both on the ground and in the air.   And you pray that nothing untoward happens to you and your flight, like the Xiamen Airlines incident.

RSA wants to move the country’s gateway 27 kms to the north, in Bulacan where on 2,500 has. of land. He commits to develop Asia’s most modern airport, with four runways initially, with the first two runways operational in six years, and passenger capacity of 100 million and double after that after 2023.  Ang has also made provisions for even six runways, if needed.

Total cost of the “aerotropolis”: P735 billion ($15 billion at the old peso-dollar rate of P50 to $1) to be raised and spent in tranches of P150 billion per year, so SMC’s debt ratios won’t be affected at all. San Miguel can borrow six times its earnings before interest, taxes, and depreciation.

SMC has borrowed only twice its EBITDA. No funding will come from the government. The airport will come complete with a seaport, a sprawling industrial estate (where electricity will be the cheapest in the land), a government center, a business center and will be linked to Manila by five major expressways.

The San Miguel Airport has already received no less than five regulatory government approvals. All that is needed is a final go-signal to proceed. 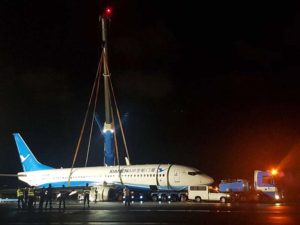 On Thursday, Aug. 16, MF8667’s  apparently inexperienced pilot overshot the NAIA runway amid a heavy thunderstorm. It was the aircraft’s second attempt at landing. It crash-landed.

The Aircraft Accident Investigation and Inquiry Board (AAIIB) says the aircraft, a Boeing 737-800, hit several runway lights. Its tire from the nose landing gear got separated, followed by the main landing gear, then the left engine.

The crash-landing at 11:56 p.m. of the 43-ton Boeing jetliner with 165 passengers and crew (none of whom died) triggered the cancellation of 200 flights and affected more than 35,000 tourist arrivals and easily twice that number of domestic passengers.

For three days, there was total chaos at NAIA.  The chaos spilled over alternate airports, Clark and Cebu.

Initial findings reported by the Inquirer said “the aircraft failed on its first attempt to land due to poor visibility because of the downpour. It circled over Manila before landing on second attempt, immediately losing contact with the Naia tower.”

“The plane bounced on landing and veered off the runway, its nose wheel collapsing and left engine ripped off.”

Transportation Secretary Arthur Tugade apologized for the passengers’ “regrettable experience.” This was “not of our own liking, nor of our making,” he deadpanned.

“This incident served as eye-opener—a reminder for us to take a second look at the processes, procedures and protocols of concerned agencies, as well as airlines, so that we may all improve in the future.”

“The disaster once again highlighted the inadequacy of the country’s principal gateway, and the urgency of increasing the utilization of Clark International Airport. The government must also make up its mind on the feasibility of constructing another runway or developing another airport to decongest the NAIA,” said the Philippine Star editorial of Aug. 20, 2018.

If you ask me, the pilots of that flight should have been arrested for economic sabotage, not to mention for possible act of terrorism.  Amid the crash-landing, there were wholesale violations of the Air Passenger Bill of Rights by nearly every airline that use NAIA.

Stranded passengers are entitled to certain amenities in case of terminal delay, even if it is due to force majeure or circumstances beyond the airline’s control,” Campos said.

“In fact, there is an administrative order specifying those passenger rights as well as the obligations of carriers,” Campos, a deputy minority leader said.

Section 12 of the AO provides that, “In case of terminal delay of at least three hours after the estimated time of departure, whether or not such is attributable to the carrier, a passenger shall have the right to:

(a) Be provided with refreshment or meals (sufficient snacks, breakfast, lunch, or dinner, as the case may be), free phone calls, text or e-mails, and first aid, if necessary; and

Under the AO, Campos said all airlines are also supposed to “provide customer service representatives who can address common problems, such as arranging for meals and hotel rooms for stranded passengers, settling denied boarding compensation, arranging luggage resolutions, and settling other routine claims or complaints on the spot.”

The Civil Aviation Authority of the Philippines said they investigated the two pilots of Flight 8667.  Both tested negative for drugs.

Xiamen Airlines apologized for its fiasco, only on Monday, Aug. 20, at 4 p.m.  The Manila airport management slapped a colossal P15 million fee, representing the cost of extracting its aircraft away from the runway.

On Wednesday, August 29, the Senate began probe of the Xiamen Airlines incident which has made NAIA more now notoriously globally for its lack of competent and visionary management.

Senate Public Services Committee Chair Sen.  Grace Poe has denounced “something perverse about an absent (airport) administration (with its) inefficiency, lack of compassion for citizens and people, and (being) anathema to the country’s quest in good public services, tourism, investments, human resources, and similar sectors.”

“The incident is truly a jolting wake-up call and we cannot afford to be the epitome of the worst airport in the world again,” Poe winced.

The government has received at least four airport proposals.

The so-called NAIA Consortium seeks to rehabilitate or expand NAIA so it can service 47 million arrivals by 2020, from the present capacity of 31 million passengers per annum (ppa). The 2020 plan seeks terminal improvements, space rationalization and optimization of operations.  It does not seek to build a new runway.  NAIA’s main problem is that it has only one international runway.  There is a second runway but it is perpendicular, not parallel, to the main runway, virtually making NAIA a single runway airport.

With Changi Airports as partner, the so-called “super consortium” includes the Aboitiz Group, the Ayala Group, Andrew Tan, Lucio Tan, John Gokongwei Jr., the group of the late Andrew Gotianun, and Manuel V. Pangilinan of PLDT and First Pacific.   They promise to spend P102 billion for the NAIA rehab.  The government seems to take them seriously because the group has been given a first proponent status.

Meanwhile, the Indian-Filipino group GMR-Megawide, already the operator of Cebu’s airport in central Philippines, wants to rejig NAIA by improving efficiency (but not build another runway) so that it could handle more aircraft movements (taking off and landing) from 45 to 60 per hour (or one flight per minute). They promise to invest P156 billion.

Formidable is the partnership of Henry Sy Sr. and Wilson Tieng. It wants to build a new airport out of Sangley Point, the navy base, at a cost of $12 billion for the new airport to handle 120 million ppa on reclaimed area of 2,500 hectares.

The best proposal to me is the San Miguel Airport in Bulakan town, Bulacan on 2,500 hectares of flat-lands.

A VICIOUS CYCLE OF MISERY It is now abundantly clear that President Duterte’s No. 1 problem is not traffic, not drugs, not terrorists, and, not China, but food – the lack or the shortage of […]

Many suspect corruption was the motive behind the massive purchase of Dengvaxia vaccine, to raise money to help fund the Liberal Party’s bid to retain the presidency, thru Mar Roxas, in 2016.  The Senate Blue […]