Finance Secretary Carlos Dominguez says despite the restrained growth performance during the second quarter (when economic growth dived to just 6%), the Philippine economy remains one of the fastest growing in Asia. 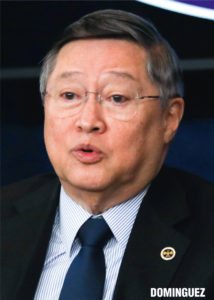 “This growth is increasingly fueled by investments,” points out the leader of President Duterte’s economic team.  The team has been under fire lately for apparent failure to contain inflation and the runaway rise in prices of rice, corn, sugar, meat, vegetables, and gasoline.

The 10-year high August 2018 inflation of 6.4% is seen as a failure of economic governance despite Duterte’s vaunted political will.  Not coincidentally, the President’s job approval ratings have fallen by double digits.

As a share of Gross Domestic Product (GDP), capital formation, a very comprehensive measure of investment, rose to 27.4% during the first half of 2018 compared to the 25.4% during the same period in 2017. This is much higher than the 21.3% average share of investments to GDP for the past 16 semesters.

Of the major components of investments, fixed capital, which mainly consists of construction and durable equipment, grew by 14.8% compared to 10.4% in the same period in 2017. This is a substantial increase from the 12.4% average growth for the last 16 semesters. 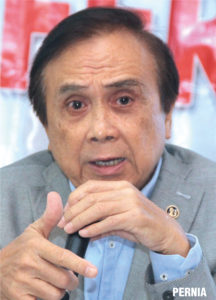 “Our economy has been on a strong footing, growing by an average of 6.4% in the last eight years, the strongest since the mid-1970s.

For the first half of 2018, the economy grew at a respectable 6.3%, slower than the 6.6% in the first half of the previous year. “This is due to prudent and judicious policy decisions for the environment, made by the government for long-term, sustainable, and resilient development,” explains Pernia.

Pernia says “the economy is also undergoing structural transformation. Growth is increasingly being driven by investments vis-à-vis consumption on the demand side, and by the industry sector – manufacturing, in particular – relative to the service sector on the supply side.  In other words, the sources of economic growth have broadened and diversified.”

“Investment spending or capital formation accelerated by 16.4% in the first semester of 2018 – a silver lining amid above-target inflation over the last few months,” gloats Pernia.

Manufacturing resurgence is likely to continue as foreign investors are recognizing the potential of the Philippines as a manufacturing hub.

DOF’s Dominguez reports that total revenue collections for the first seven months of this year amounted to P1.65 trillion. This is 21% higher than the same period last year. 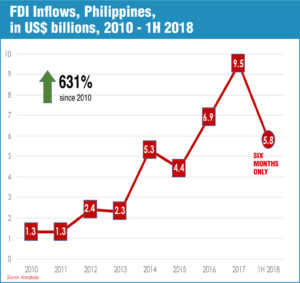 Tax effort has improved as a consequence. At about 15% of GDP, our tax effort matches those of the best-managed economies in the region.

The improvement in the tax effort is a result of the continuing administrative reforms in our revenue agencies as well as the effects of the new tax reform law.

“Healthy revenue collections help us make the necessary economic investments to sustain our growth momentum long into the future. They enable us to make the investments in our precious human capital to power the modernization of our economy,” says Dominguez.

The first package of the comprehensive tax reform program increased the disposable income of 99% of the working population.

Filipinos earning below P250,000 annually are now exempted from paying personal income taxes while workers earning above it now receive about a month’s extra take-home pay each year.

“By correcting the tax rate for our wage earners, we have basically given out a 14th month pay. A total of P12 billion monthly have been restored to the ordinary taxpayers for them to use as they wish,” says Dominguez.

The sustained robust sales of retail giants and fast food chains since this year’s implementation of the new tax law prove that Filipinos now have more money to spend as a result of the hefty personal income tax cuts.

Increases in the effective take-home pay contributes to the inflationary pressures we are now experiencing. But it is, in a significant way, a measure for the alleviation of our working class.  “Those mistakenly calling for a suspension of the tax reform law must explain to the 99% of Filipino taxpayers why a higher tax penalty will be restored on their incomes,” says Dominguez. 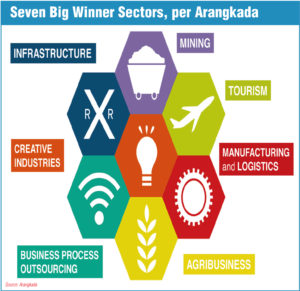 “The lower personal income tax rate will help us build a stronger middle class,” says Dominguez. This puts the Philippines on track to becoming an upper-middle-income country by 2022 and makes progress in poverty reduction by lifting one million Filipinos from poverty each year.

The first package also lowered the estate and donor’s tax, from 20% of the net estate value and 15% on net donations, to only a single tax rate of 6%. Unfortunately, your children who will benefit from this have not yet gotten it and have not yet thanked us for that.

“This makes the land market more efficient because as we know, many people do not pay the estate taxes on land and therefore, the land is still in the name of their forbearers and cannot be developed,” explains the DOF chief

A complementary package to the first tax reform law is Package 1B. It consists of the proposed tax amnesty program complemented by the lifting of bank secrecy laws in tax fraud cases; the automatic exchange of information between the Philippines and its treaty partners; and adjustments to the Motor Vehicle Users’ Charge (MVUC).

The program will help clear the tax dockets as well as enable the transfer of stranded real estate properties so that they can be made economically useful. In particular, we proposed an estate tax amnesty where the government collects only 6% of the net undeclared estate tax for those who died prior to Jan. 1, 2018.

The most important elements of the succeeding tax reform packages are the reduction of corporate income tax rates and the rationalization of our fiscal incentives system. 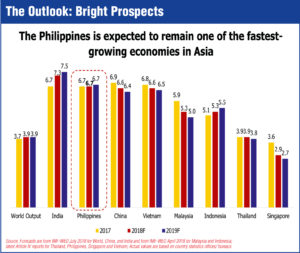 The rationalization of fiscal incentives, in turn, will create a level playing field for our enterprises and attract new players to compete. The accretion of so many incentive schemes through the uncoordinated action of legislators and economic zones produced chaos.

“We are seeking the rationalization of incentives to encourage enterprises to hire more workers, improve their competitiveness and deliver on the social benefits for which the incentives were granted in the first place,” explains Dominguez.

Other tax reform packages include Package 2 plus which contains additional excise taxes on tobacco and alcohol products as well as an increase in the government’s share from mining.

“Managing our fiscal stability sometimes requires doing things that are not necessarily popular. But it is only because the public fails to fully appreciate the long-term gains of doing them,” says Dominguez.

The International Monetary Fund (IMF) projects the Philippines to remain one of the best-performing economies in the region in 2018 and 2019.  The IMF projects the economy to grow by 6.7% in 2018, next to India projected to grow by 7.3%.

According to Planning Chief Pernia, while inter-regional disparity within the country remains a critical issue, higher economic growth was recorded in many regions last year. The region with the highest growth rate, the Cordillera Administrative Region, grew 12.1% in 2017 because of the rebound in construction and manufacturing sectors and recovery in agriculture.

The runners-up were Central Luzon at 9.3% growth in 2017 because of robust construction spending, and the Davao Region, up 10.9% due to the boom in private construction.

The Philippines is young 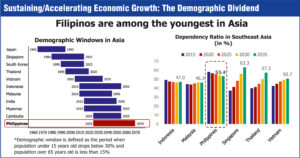 Compared with its Asian peers, the Philippines has yet to enter its demographic dividend window. In terms of dependency, the Philippines had the highest ratio in Southeast Asia in 2015 at 58.2%. However, the ratio is expected to decline in the next few years as the working age population steadily grows, and will be lower than Singapore and Thailand by 2035.

The Philippines is expected to be the last major Asian economy to benefit from the demographic dividend window between the years 2025 to 2070.

If not properly addressed, Pernia says we would need to wait until at least 2050 to benefit from the demographic dividend, or possibly even miss it altogether. For this reason, we need to fully implement the RPRH Law that includes the family planning program and investment in the youth’s human capital.

Maximizing the demographic dividend will ensure that the economy will expand even faster beyond the country’s medium-term plan, and thus achieve our long-term vision goal, or what’s referred to as AmBisyon Natin 2040. 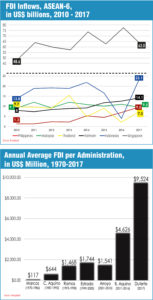 To boost investment-led economic growth, some 4,490 infrastructure programs, activities, and projects on transportation, water resources, energy, information and communications technology (ICT), social and other public infrastructure, with total investment requirement of P7.74 trillion. These will be rolled out within the medium-term.

These infrastructure projects will be funded with the best possible funding sources, or an optimal mix of financing from public and private sources, besides official development assistance.

This aggressive infrastructure spending is expected to boost the economy by stimulating production of output in different industries, contributing as much as P1.4 trillion gross value added, or about 5.3% of the country’s GDP, by 2022.  Likewise, it is projected to generate additional employment, both direct and indirect, reaching about 1.9 million by 2022.  This will greatly contribute in achieving the PDP target to reduce the unemployment rate in the country from 5.5% in 2016 to around 3-5% in 2022.

Based on NEDA’s Public Investment Program (PIP) 2017-2022, some 98 interregional and 4,231 region-specific programs and projects will be distributed across the regions.

Another 161 infrastructure projects nationwide in scope will be rolled out for implementation within the plan period.  It may be noted that the ARMM then has the most number of projects in the PIP 2017-2022 (with 1,340 projects listed).

Of the Infrastructure Flagship Projects, 44 of 75 are already in the implementation stage, 24 in the development (pre-investment study) phase, and 7 are for review.

Thirty-two Flagship Projects are expected to be completed within this Administration. While the remaining 43 projects will be completed beyond 2022, “we expect to commence their implementation during this administration’s term,” assures Pernia.

For infra projects, a project must hurdle the social discount rate of 10% to pass the test.

According to the late Ramon Magsaysay (who was president from Dec. 30, 1953 to March 17, 1957), “the President should set the example of a big heart, an honest mind, sound instincts, the virtue of […]

“SC NEEDS AN ENTIRELY NEW CORPUS, NOT JUST A NEW HEAD; IT MUST NOW BE TOTALLY RECONSTITUTED”

Ayala Corp. recorded a net income of P30.3 billion in 2017, up 16% from 2016 on the back of robust double-digit growth of its real estate and power businesses. The positive results were buoyed by […]