Former Speaker of the House

We are off to preside at the October 24-27 10th General Assembly of the International Conference of Asian Political Parties (ICAPP) in Moscow, now composed of more than 340 ruling, opposition, and independent parties in Asia, with expected guests from political groups from Europe, Africa, North America, Latin America and Australasia. 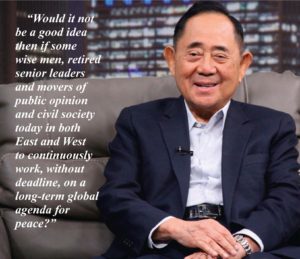 The Moscow meeting on October 24-27 is immediately followed by a Special Workshop in Seoul, South Korea, on Green Cities, October 30-November 2, being organized by former U.N. Secretary-General Ban Ki-moon, now Chairman of the Global Green Growth Institute (GGGI), former South Korean Ambassador to Russia Park Rob-yug, now our ICAPP Secretary-General based in Seoul, and by the undersigned as ICAPP Founding Chairman and Chairman of the ICAPP Standing Committee.

For the Moscow conference, following our earlier meetings in Vladivostok in the last three years, on vast Russia’s eastern frontier on the Pacific coast, we told Russian Ambassador to Manila Igor Khovaev last week that we are still writing our speech and hope to seek counsel from our other Russian friends, Senator Andrey Klimov, Russian board member in our 35-man ICAPP Standing Committee, and our former ICAPP board member, Konstantin Koshachev, who is well regarded by the Russian leadership and adviser to President Putin.

However as a friend to Russia, it is our hope that the U.S., China, and the major powers in the European Union who were Allies during World War II, that it might be a good idea in our opening speech to devote some time to recall the great glory days of World War II, when Russia under Joseph Stalin, the U.S. under Franklin Delano Roosevelt, England under Winston Churchill, Nazi-occupied France led from the outside by Gen. Charles de Gaulle, China under President Chiang Kai-shek, followed later by Mao Tze Tung and Deng Hsiao Peng, with the Philippines, as a Commonwealth then, not yet independent but allied with the U.S., led the Allies into victory and slowly but steadily lifted the world from the ashes of devastation.

Would it not be a good idea then if some wise men, retired senior leaders and movers of public opinion and civil society today in both East and West would call on the leaders now of the allied World War II nations and their former enemies, but today, their staunch allies, Japan, Germany and Italy, in a genuine global alliance in concert with and under United Nations aegis, to continuously work, without deadline, on a long-term global agenda for peace.

Impossible dream, maybe, but the optimists and the students of history believe that the work must continuously go on and the dream should never die.

And last week, before his scheduled departure as Secretary of Foreign Affairs to run for Congressman in the House of Representatives as a prelude to his announced eventual run for Speaker of the House next year, we suggested that Alan Peter Cayetano might finalize with President Rodrigo Duterte an understanding with Chinese President Xi Jinping on a likely Joint Exploration and Development Program in the South China Sea (West Philippine Sea), as the highlight of several agreements with China during President Xi’s scheduled official visit to Manila in November.

Oil and gas in Palawan 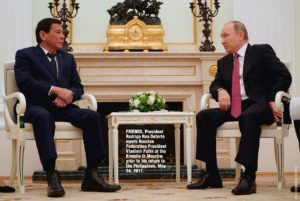 We believe the South China Sea area off Palawan and below the Spratlys with now multiple claimants, could be expected to yield significant volumes of natural gas and/or crude oil, which could easily be pumped and shipped to nearby refineries in the Philippines and Southern China as against the expensive back-and-forth long journeys of huge tankers across the Straits of Malacca, the Gulf of Thailand, the Indian Ocean, the Straits of Hormuz and into the Persian Gulf (Arab Gulf) to lift crude in Saudi Arabia or United Arab Emirates or Kuwait for refineries in the Philippines, China, Taiwan, Korea and Japan.

As President of the Petroleum Association of the Philippines for more than ten years and having helped discover and develop the first Philippine offshore oil wells in the 1970s in the Northwest Palawan Sea (the Nido and Masinloc oil wells for our companies then, Basic Petroleum and Landoil, together with our partners, Oriental Petroleum, Philippine Overseas and the U.S. companies), it is urgent and important that the Philippines under President Duterte and incoming Secretary Locsin might now direct the completion of negotiations with Chinaand  schedule the first, long-anticipated joint-venture Filipino and Chinese offshore drilling in the sea, most likely, we would guess, in the Reed Bank of the South China Sea (West Philippine Sea).

In a previous recent column, we conjectured that a successful oil discovery in the South China Sea by a Filipino-Chinese joint venture or consortium will dramatically reduce or put to an end the possibilities of explosive conflict in the area.

When we were Speaker of the House of Representatives and founding Chairman of the International Conference of Asian Political Parties (ICAPP) in the year 2000,  we accompanied then President Gloria Macapagal Arroyo on her first state visit to China, which coincided with the Third Biennial Conference of the ICAPP (now representing some 300 ruling, opposition, and independent political parties in Asia) held in Beijing. To take advantage of the happy occasion in the Chinese capital, we proposed to the President that we negotiate and sign a Joint Oil Seismic agreement with China in the South China Sea which she then and there approved, and together, we immediately presented the idea to our host, the China President Hu Jintao, who heartily gave his approval.

After we left the Chinese President for another meeting, we thought of another potential winner, and proposed that we include the other claimant in the South China Sea, Vietnam, for a Tripartite Agreement.

The Chinese President then smiled and gave his immediate assent, and then both Presidents Hu Jintao and Gloria Macapagal Arroyo then turned around and looked at me, to undertake a special mission to convince the Vietnamese to be the Third Signatory, in what was to become a Tripartite Seismic Agreement, preparatory to drilling. After another day in Beijing with wife Gina, then President Arroyo and the First Gentleman Mike Arroyo returned to Manila after a most productive visit to China.

At home, after a quick check with our office in Congress, we hurriedly motored to the airport for our next journey to Hanoi to convince the Vietnamese to co-sign what would become the Tripartite Seismic Agreement in the South China Sea. 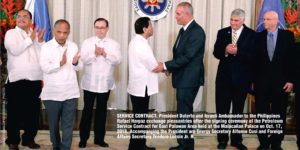 We were not apprehensive of our Hanoi visit. While Vietnam was the third claimant in the isles, sand cays, coral reefs, and the tiny areas in the South China Sea, obviously also for hydrocarbons, we were also of the belief that friendship in ASEAN and realpolitik would insure that Hanoi would co-sign a tripartite seismic pact.

In Hanoi, we met with both the past and the current Communist Party of Vietnam (CPV) General Secretary, Nguyeh Duc Manh and Nguyen Phu Throng, respectively, who are our old friends, and both actually higher in rank than Vietnam’s President or Prime Minister under their hierarchical system. We had the other good fortune that Vietnam’s capable Deputy Foreign Minister was also a graduate of our De La Salle College, where we finished high school, and as with the Vietnam Speaker, we were on first-name basis.

We went home with Vietnam’s agreement our tripartite Philippines-China-Vietnam venture, hopefully a precursor of the anticipated eventual common oil exploration and development agreement in the South China Sea. The costs of the detailed wide-ranging Seismic Survey in the sea were to be jointly shared by the three governments.

The subsequent seismic survey findings indicated a number of attractive drillable structures, which would most likely bear hydrocarbons (oil and/or gas) below the sea, and which can only be tested by strategraphic tests: direct drilling by expensive exploration below the sea bed conducted by modern drillships.

In earlier days and up to now, the best and biggest drillships and semi-submersibles at the time were those built and owned by the Americans; most of the offshore drilling were in the North Sea, in the U.S. West Coast, in the Gulf of Mexico, and in the Alaskan coast.

A few years ago, while on a visit to southern China, our friends in the offshore oil exploration industry, spoke of giant Chinese drillships and drilling platforms, some on standby off Fujian or Guangdong waters or near Hainan island.

Instead of hiring U.S. or Western drillships, which would have to sail great distances to reach potential drilling sites in the South China Sea, it would indeed be prudent and less expensive, if any first joint Filipino-Chinese oil-drilling venture in the China Sea would engage the huge Chinese offshore drillships parked nearby.

The exploration costs and drillship rentals will be cheaper and shared, and in any Filipino-Chinese oil drilling partnership, the most likely operator would be a Chinese oil company partner, most likely government-owned, and which would engage on contract the Chinese oil-drilling ship.

This would be the likely scenario if our astute Foreign Secretary Alan Peter Cayetano or equally brilliant, rumoured successor Teodoro “Teddyboy” Locsin, the incumbent Philippine Ambassador to the U.N., finalizes an Oil Exploration Agreement with China with a commitment to drill a number of offshore wells in the South China Sea and which, we would guess, would result in substantial oil discoveries that could dramatically reduce our huge annual oil bill and almost total dependence on Arabian crude oil.

Presumably, any agreement with China will comply with the Philippine Constitution, which reserves the Philippines’ natural resources for exploitation and use by Filipinos, if the drilling is conducted in the old Filipino Petroleum Exploration Concession (PEC), but Chinese and/or foreign participation is allowed and encouraged under the current Service Contracts.

The Filipino-Chinese exploration agreement will most likely designate an “Operator,” as in all Western or Eastern oil exploration agreements. One of the partners will undertake the management of the drilling operation designated as “Operator” with the costs shared by the parties, with obviously the manager-operator given an extra fee. The operator could also be the Filipino partner  but unlikely because management of the drilling will be undertaken by the operator.

The much larger work will commence when oil is struck and the huge problems of development begin: raising huge finance, building pipelines in the sea all the way to on-land destinations, or loading more crude on tankers destined to farther ports in China or the Philippines or for third-party buyers.