Economic growth, as measured by the expansion in the country’s output of goods and services (Gross Domestic Product or GDP), slowed down in the second quarter of 2018.

The economy grew by just 6% in the April-May-June period this year.   This is a letdown from the hefty 6.7% growth in the second quarter of 2017. 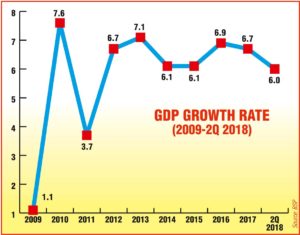 The slower GDP growth rate was due mainly to agriculture which grew by a paltry 0.2%.  With the population growing by 1.8% per year to 106 million today, a 0.2% farm growth means we have a food shortage.

Since food is at least half or 50% of an average household’s expenditure (rice alone eats up 20%), a nearly negative agriculture growth means higher inflation rate because there are more pesos chasing a decreasing supply of food.

In a way, a slower economic growth is good news.  It wakes up some people about what is fundamentally wrong with the economy, like why can’t a country with such a rich soil produce enough food for its people?  It also diminishes the hubris of some economic managers who think they are insanely great.

Also, lower economic growth figures this year mean higher growth numbers in 2019 because of the principle of — what goes down must somehow go up or what economists call the low base effect.  Next year is an election year and so our politicians can claim some credit for a stronger economy by then.

Truth to tell, 2018 is going to be the best year for most of our large corporations.   The large conglomerates account for easily 60% of economic output. 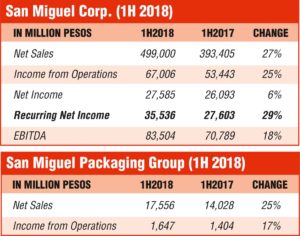 Take San Miguel Corp. (SMC), the Philippines’ largest conglomerate in sales and profits.   My estimate is that SMC revenues will reach the P1-trillion mark for the first time in its 128-year history, while profits will be a record P80 billion.

San Miguel’s first half results tell a compelling story.  January-June 2018 revenues reached a record P499 billion, 27% higher than the same period in 2017.  If you annualize P499 billion or double this amount (since there are two semesters in a year), it is reasonable to expect a P1 trillion sale for SMC for the whole of 2018.

SMC’s first half 2018 profits were P35.5 billion.  You double that to estimate a whole year net of P71 billion. Since the second half is usually stronger than the first, an P80 billion profit haul is not unlikely for the whole of 2018.

SMC is a proxy for the country’s growth story.  Its sales are about 5% of total GDP.  And it is present in many industries which are key components of the consumer price index and GDP—like food and beverage, fuel, power, utilities, infra, and services.

San Miguel says growth in its second half sales and profits was mainly driven by higher volumes and favorable selling prices.

All major businesses in food and beverage, power, fuel and oil, and infrastructure sustained their respective growth momentum. Including effects of unrealized mark-to-market losses as a result of foreign exchange translation, reported net income amounted to P27.6 billion, up 6%.

SMC’s operating income also registered higher growth at 25% to P67 billion brought about by higher volumes and better margins. Group EBITDA amounted to P83.5 billion, 18% higher than the prior year.

Says SMC President and Chief Operating Officer Ramon S. Ang:  “Increased business focus and a lot of hard work were key to our group’s stellar performance. We’re encouraged by the results we’ve had so far, and are very hopeful that this momentum will carry through for the rest of the year.” 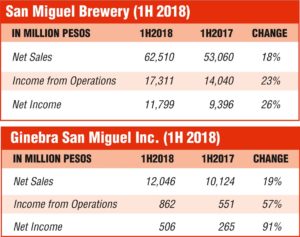 Combined sales revenues of San Miguel Food and Beverage, Inc. for the first half totaled P137.4 billion, 15% higher than P119.1 billion in 2017. Similarly, operating income and net income of P22.9 billion and P15.4 billion both grew 20% from the same period last year.

Combined sales revenues of San Miguel Food and Beverage, Inc. for the first half totaled P137.4 billion, 15% higher than P119.1 billion in 2017. Similarly, operating income and net income of P22.9 billion and P15.4 billion both grew 20% from the same period last year.

San Miguel Brewery, Inc. continued its solid performance posting strong volumes mainly driven by increased consumption of their beer products nationwide and boosted by the implementation of new campaigns and consumer and trade programs that continued to further strengthen the equity of their SMB brands. Revenues of P62.5 billion, grew 18% higher vs. last year. SMB’s consolidated operating income and net income of P17.3 billion and P11.8 billion, grew 23% and 26% from last year respectively.

Food Group’s consolidated revenues for the first half of the year, reached P62.9 billion, 12.4% higher than last year mainly driven by the strong performance of Agro-industrial and Branded Value-Added businesses. Income from Operations, and the other hand, grew 5.7% to P4.7 billion, on the back of the business segments’ overall higher revenues and improved operational efficiencies. Net income amounted to P3.1 billion. 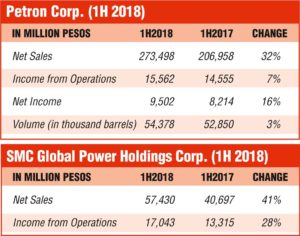 TRAIN – Tax Reform for Acceleration and InclusioN – is the most significant and far-reaching tax reform and legislation under the administration of President Duterte. This early though, some cynics dismiss it as just another […]

WHAT THE SENATE WANTS YOU TO PAY AS TAXES BEGINNING 2018